Carl Vellotti is a National Chess Champion and 2x Idaho High School Chess Champion. Along with his brother, International Master Luke Vellotti, he reigns as one of the top players in the State for both youth & adults.

As both a community leader and an academic standout, Carl is considered by parents to be a great role model for their children. Some of his many accomplishments include being a Fellow on the City Fellows Consortium, President of the UCLA Chess Club, Editorial Director of UCLA's Spoon University, a research intern at the Iron Lab at UCLA, and an Associate Project Manager at the Healthtech startup Heal. Carl teaches private chess lessons through Vellotti's Chess School to students of all ages, and recently started his own academic coaching company called Tutor Champion. 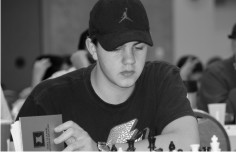 The Vellotti brothers endorse the mission of the Governor's council to improve the quality and access of K-12 students to computer science eduction in the state. Watch KBOI news video now: Click Here

Carl was awarded the Doshi Family Scholarship from UCLA's School of Engineering and Applied Science (HSSEAS). This scholarship is awarded for achievements and commitment to academic excellence as a student in the UCLA HSSEAS.